Good day all 101st Fleet, 101st Fleet Delta Squad, and 101st Imperial Fleet members. Welcome to this months edition of “State of the Fleet” for the month of October, in the earth year 2015.

I have a very special guest co-presenting with me today. Morn from Deep Space Nine. Well say hello morn.

Anyway, Lets get on with this months edition after that lovely story from Morn.

the 101st Fleets facebook page has had a bit of activity in the past month. With many of our members posting screenshots or helpful information regarding the upcoming Season 11 for STO: New Dawn.

Our first screenshot comes from our very own Admiral Will. This picture shows our dear admiral on one of his alts, in New Romulus command sector.

It seems one of the Romulan Republic guards too the admiral up on his offer to test his new Romulan ale, when I made the comment about trying the new version of people, admiral will simply responded with this.

Admiral Will: He said he was thirsty, I said i have some Romulan Ale, I forgot to mention the part that it could also be use to jump start a Warp Core

We also have another picture of Admiral Ieon in his Ambassdor class USS Queen Mary B, that was brought out of retirement due to the emergency of the Iconian war.

I also added my own picture to facebook just in the past few days. With USS Zuikaku in orbit of Earth with Vice Admiral Janeways USS Devastator.

Please remember, if you havent already, you can join the 101st Fleet Facebook page. Just search for 101st Fleet and request to join the page.

So, what do you think of these pictures and screenshots Morn?

Admiral Aaron “I had no idea you were an art critic Morn, that’s a very in depth thought on those screenshots”

As of several days ago, the 101st Fleet has completely completed our Fleet Research Lab. We are also the first Equator Armada federation fleet to complete the fleet holding as well.

Congratulations to everyone. Please be reminded you can can slot fleet projects, please slot only provision projects from now on. To ensure we keep a very healthy supply of provisions.

Admiral Aaron “Well, I suppose your right Morn, but we cant exactly move the research lab”.

The Launch Date for season 11 has been announced by Cryptic. Come October 27th 2015, the new season will be uploaded to Holodeck. The new season focuses on the aftermath of the war with the iconians, and a attempted re-focusing on exploration.

However, the mirror universe, whose war with the iconians ended very differently, have their own ideas. Alot has happened in the past month, so lets re-cap.

For the past month, Cryptic has been doing frequent Facebook, twitter and forum polls to decide the look of the new Federation T6 Carrier. The voting is for the looks of the ship only, and not for deciding what stats this ship will have.

So far, we have reached the Grand Final where Alpha will be vs Omega to determine the look of the new carrier. Looks like interest in this contest has been really high, with lots of community involvement in each stage of the voting period.

You can check out the initial dev blog post below. This also has links to the up to date competition. Voting for the Grand final commences Monday 19th October 2015.

Personally, Its going to be very hard to determine for myself which one I like more. Alpha, or Omega.

Admiral Aaron “Well, I suppose I never thought of it that way. When did you get a degree in federation starship engineering Morn? Wait, forget I asked”. 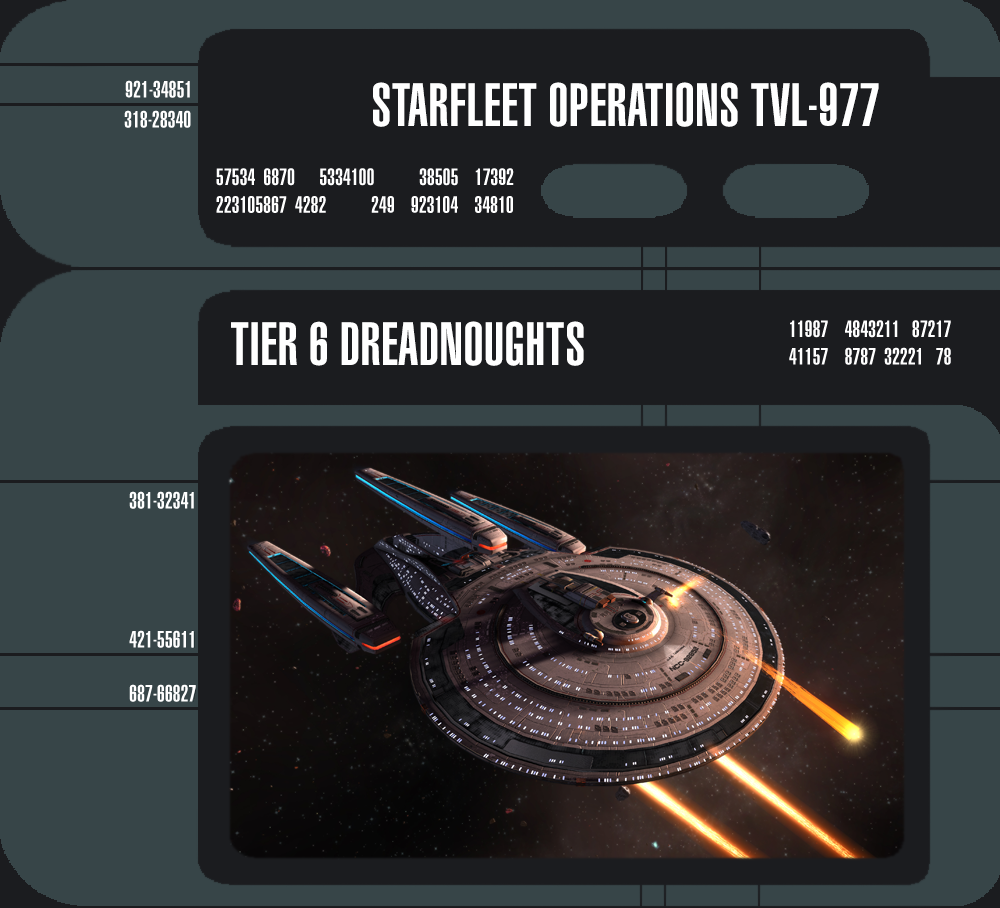 Cryptic have also released re-done T6 dreadnoughts. These are based of the Galaxy-X class for the federation, and other classes for the Romulans and Klingons.

I havent flown these myself, but from what I hear from the community, they have been well received. You can check our the dev blog post regarding these ships in the below hyperlink

Cryptic have released onto tribble just as of yesterday, the new battlezone for Season 11 – Badlands. I have managed to play this area a couple of times so far in the past few days. This zone is pretty similar to the undine battlezone, with a couple of small and big changes.

There are some new gameplay mechanics, which require more teamwork than straight DPS (which is nice to see). As well as several additions that require you to be mobile (but if you have too fast of a ship, it will actually hinder you).

Above is a screenshot I took while I was in the zone. So far I have been having some nice fun with this Battlezone. To you who are wondering about the rewards, dont worry, they are very similar to the undine Battlezone so you should be fine. 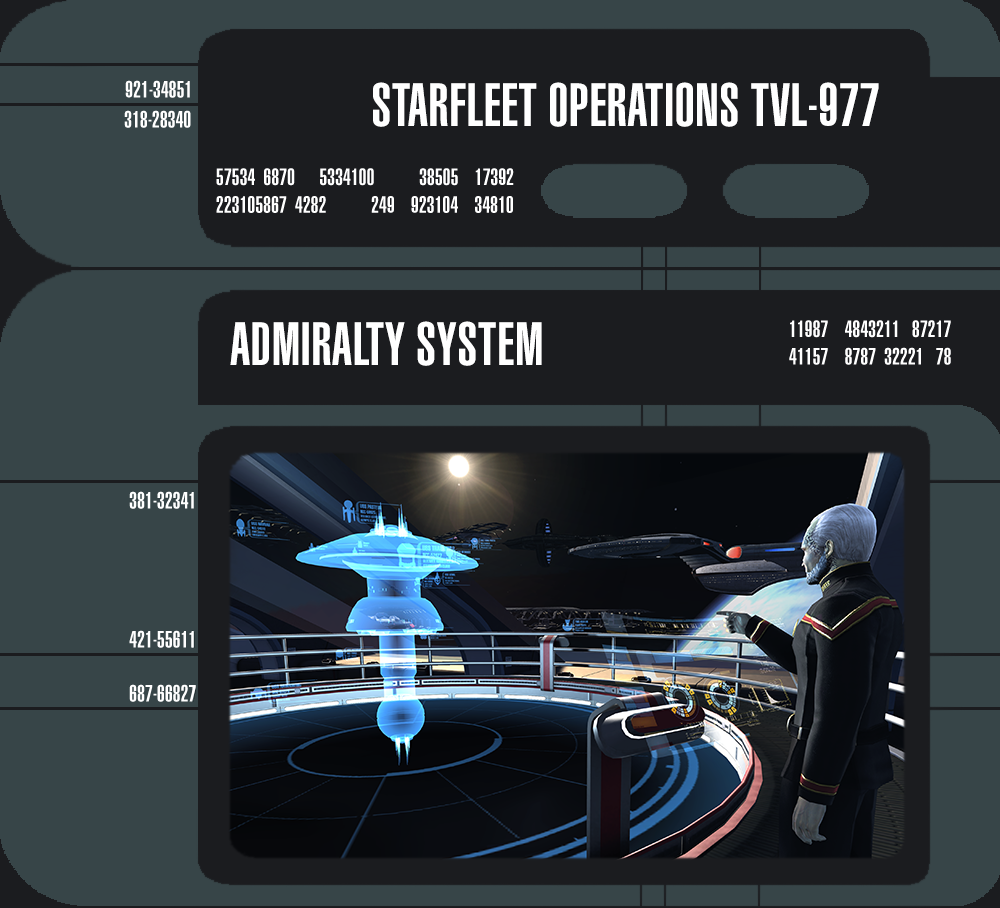 The Admiralty system, simply stated, is a DOFF system that uses starships instead of crew members. However any distinction between the two systems stops there. The Admiralty system allows you to use starships you currently own, will own in the future, or can place back into your shipyard, on missions where you can get some nice rewards.

You can earn special rewards, R&D Materials, dilithium, DOFFs, EC and alot more through this system. While you cannnot as many missions in a single day compared to the DOFF mission, the rewards are greatly improved. So overall, while you arent do as many missions, you are earning more rewards per mission than you would DOFFing.

I have played around with this system, and I have quite enjoyed it so far. Having that thrill when a mission completes or even crits is very nice. Also, please be aware that this system is a supplement to the DOFF system, meaning it can work alongside to it as an alternative.

Admiral Aaron “Well, I suppose that’s true Morn. Maybe you can talk to Cryptic about adding it as an extension”.

Admiral Aaron “What do you mean NDA?….”

There has been some information regarding the next feature episode from Cryptic, which will most likely be released when Season 11 hits. This Featured Episode is called “Sunrise”.

So far, the only information we have regarding this, is a unknown system showing up in the Alpha Quadrant, and this cryptic text in the tribble season 11 notes.

“The Iconian War is over, and the various galactic powers are turning their attention to expansions and exploration once more. Just at the edge of known space, a star has mysteriously started to go out. Visit this system and chart it while trying to answer the question whats happening to the star! this episode fetaures the voice talent of Enterprise guest star Kipleigh Brown as a new character”

So, a great mystery to solve right off the bat.

Admiral Aaron “Why am I not surprised you know that Morn”

Next months “State of the Fleet” will be posted on November 21st 2015. As we get closer to the end of another year, it is interesting to see and look back at what has happened so far in the past 10 months.

Admiral Aaron “Ahh, Yes. Thats right Morn you were going to continue on with your story”

Admiral Aaron listens to Morns story, while his right hand slowly moves t a PADD next to him, tapping his fingers, the admiral rights a message before clicking send.

“This is a priority one distress call from Admiral Aaron. I am stuck on Deep Space Nine listening to one of Morns stories. For the love of god, I need assistance. Help, please god help me”.

I hope you all enjoyed this months “State of the Fleet” I say see you next time.