Morning folks, and welcome to the State of the Fleet Address, March 2017, for the 101st and 102nd fleets. Apologises for the delay in this one, been really busy the last week and a half. Oh, also ignore the construction going on. Cryptic are just undergoing a massive space rebalance for the game, so there are construction and deconstruction going on everywhere.

Random construction foreman walks up “Sir, I need you to sign here”.

Admiral Aaron takes clipboard “Wait, authorization to remove automated Beam Fire at Will targeting?, Sure, I sign it, but whats the problem?”

“One of your senior crewman are taking the removal, a bit too hard. So we just wanted authorisation to calm her down”

Admiral Aaron looks over to his tactical station. A female andorian, Commander Tarah, is seen digging her fingernails into the console, with two builders desperately trying to release her “Noooooo, you can take away my art. Anything but my art”.

Alright, we that, lets get started with this months post.

There has been some posts on the 101st and 102nd fleet Facebook pages this month. As usual, if you have anything to share regarding your ship, crew or game, please share it. We would love to hear your stories.

First, a very funny Cartoon provided by Captain Chris on the 102nd fleet. I have to admit, I am still laughing about this one.

After a long month of voting, the 102nd Fleet has chosen its flagship. The USS Queen Mary NCC 1706-A, Kelvin Class ship.

Also, Ieon Productions have produced one of their videos. This time for one of the XBox players, Admiral Karl’s USS Abaddon.

Ieon Productions (Reaper86 Films) has been very busy the last month, producing many quality videos for Star Trek Online. Again, our thanks go to Admiral Ieon for his tireless video producing. I enjoy seeing every new video he comes up with.

First up, The USS Queen Mary’s crew takes on the Kobayashi Maru test.

Second, is a launch video for Admiral Will’s USS Beowulf, one of the flagships of the 101st Fleet.

Again, thanks go to Admiral Ieon for his productions. They are all very enjoyable videos, and i enjoy seeing them.

Senior Foreman interupts again “Sir, I also need you to sign this”

Admiral Aaron sighs “Sure what now” Looks down at clipboard “Authorization to remove plasma generating power leech console?, There is so such console on my ship”

Foreman looks surprised “Oh, sorry, amount of ships I have done in the past week that had that console, just became routine for me” 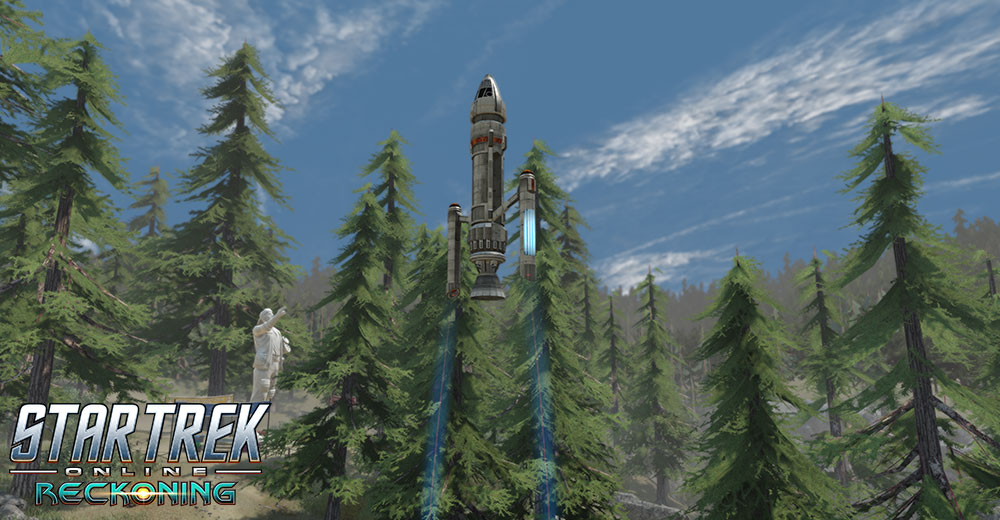 Well, what can I say about Cryptic this month. In a broad sense, not really much. Cryptic have been hard at work with smaller events, as well as the breach even that just finished last week.

However, the biggest news, that is really driving the community, is the space balance changes which are currently on tribble for testing. Please see the original blog post that had general information regarding the test.

For the last two weeks, there has been multiple tribble patch notes, with massive list of changes. The changes alone are too big to get into. However, I will detail some of the major ones that are splitting community opinion.

* Plasmonic leechs power boost has been reduced. Also, it is now at a fixed rate regardless of how much DrainX skill you have. You can still drain alot of your enemies power, but it no longer gets transferred to your ship.

* Plasma embassy consoles have been hit hard, very hard. These consoles now apply plasma damage per cycle, instead of per shot. Also, there damage boost has been reduced by 75%.

* Beam Fire at Will now has a damage reduction and accuracy reduction based on the skill you have. For example, BFAW 1 has a 40% less accuracy, and damage boost compared to holodeck numbers at this time.

* If you have invincibility or continuity, it now locks out usage of the Tactical captain ability of Go Down Fighting.

To sum it all up, the meta alot of players have been enjoying where they could build a massive DPS ship with no downsides very easy, has basically been destroyed.

Spartan, true to his word, has been taking feedback, and changing things where he can. In my opinion, it looks like this will encourage more build choices and variants compared to what we have now. There has been no information on exactly when these changes will hit holodeck.

However, I would personally expect to see these changes go live in middle of April. I would like to remind everyone, if you have feedback, please give me back logically and not screaming or shouting at the devs.

The areas you can give feedback is on the official forums, as well as the reddit sto page for the game. Both areas the devs frequent alot, so there is a good chance they will see your feedback there.

Admiral Aaron sighs “What now?” looks at clipboard “Authorization to generate more power with EPS induction matrix?, How much power are we talking about here?”

Senior foreman thinks for a moment “Hmmm, about plus twenty five for each sub-system”

Aaron looks shocked for a moment, and a bit scared “You havent told my chief engineer about this have you?”

Senior Foreman looks surprised “Oh course I did, need to instruct every area of potential works. Why wouldn’t I inform them?”

Giggling laugh comes from the side of two man, and Zuikaku’s chief engineer is smiling a evil smile.

“More power, even more power! Now I can do even more incredible things. Hahhhh, HAHAHAHHAHAHAH” laugh starts taking on a evil tone.

Senior Foreman, with a shocked scared look on his face “Are you scared as I am right about now sir”

Aaron looks at the foreman “Oh you have no idea”

The biggest news, which was posted just this morning, is the return of Firs Contact day celebrations.

While this event had been on the calendar for a while, everyone (including myself) was expecting the same Visit flagships of your faction small mission. What we got however, looks to me even more exciting and cool.

For this event (which runs from Thursday 39th March – Thursday April 6th) players visit Bozeman, Montana. There, you engage in a mind game to build your own replica Phoenix.

You search the area for parts, and after a few minutes, you return to the launch area to build your unfinished ships. The ships are launched, and the player with the highest altitude is declared the winner.

Honesty, I can wait to try this out. While no rewards are listed (if there are any) it looks like a new unique event, and a load of fun to boot.

Next months State of the Fleet is on April 15th 2017 (I promise :)). Again, if anyone has any feedback regarding these posts, or wishes for additional content, please let me know. As always, this blog posts are for you, so anything that can further enhance them, I will definitely be looking at.

Happy warp speed, and I will see you ingame.